- December 07, 2014
Headless Ubuntu 14.01 LTS server with full disk encryption, remote unlock over SSH, software RAID, LVM and support for over 2TB disks with EFI and BIOS MBR boot. That's what this post is about. Oh, and pics are at the end.


I recently had to (re)install few Linux servers remotely with moderately complex requirements. Now when I think it's finally all working some documentation of steps taken might be in place. Who knows, this might even be useful to someone else as well?

To ensure data safety I wanted full disk encryption - including root filesystem. Another hurdle was mdraid mirrored 3TB disks requiring GPT partitions, not getting stuck on initramfs boot stage if there is minor problems with RAID had to be handled too, then I got stuck with all sorts of EFI boot problems, remote unlocking dmcrypt over SSH is still missing feature of Ubuntu and so on.

Following instructions use GPT partitions but setup will boot in both traditional BIOS MBR and EFI modes. It will also boot from degraded RAID and allow remote unlocking filesystem encryption. None of which is possible with regular Linux installers used by distributions as far as I know. Another bonus is ssh access to initramfs for also other purposes than unlocking encryption. While changes made are quite small, in the end this still causes risks when doing upgrades that affect kernel and initramfs creation. Major upgrades between releases should be avoided as they have high risks. Yet they do seem to work. I've tried upgrading older versions to 14.04, 14.04 to 14.10 and 14.10 to prerelease of 15.04. Both upgrade and unlocking crypto after boot worked over SSH just fine.

We're bootstrapping Ubuntu Server 14.04.1 LTS x64 but not using stock Ubuntu installer. Suitable (i.e. tested) operating systems to bootstrap from are Ubuntu 14.04, Debian 7.7, CentOS 7 and Hetzner rescue system (based on Debian 7). You can perform install either from "Live" or "Rescue" mode. Just remember that rescue modes tend to be more restricted and SSH server might not be available. Hetzner rescue system is full live text-mode Linux and obviously has SSH server running.

To perform install in EFI mode only bootstrapping from Ubuntu 14.04, CentOS 7 and Debian 7.7 rescue media work because Debian live CDs lack EFI boot support. Switching to EFI mode after install is possible and depending on your motherboard settings it might even switch to EFI mode automatically on first boot.

Since install and resulting system will require Internet access it's highly recommend to enable SSH server as first step. Then SSH to remote server to do rest of steps. Especially manually typing scripts required to unlock dmcrypt volumes after reboot is very error prone step.

Select "Rescue a broken system" on GRUB menu. Answer to questions when prompted or pick defaults. Eventually you reach prompt asking to pick root filesystem. Select "Do not use a root file system" and then "Execute shell in the installer environment". Because there's no SSH server included you need to type everything manually. If you're stuck with one of these options you should consider wgetting complex parts from external webserver in order to avoid typing it all.

We also make few assumptions. One of them is that all hard disks present will be erased and that disks are new or wiped. That means no existing partitions, no old mdraid array signatures, no funky boot sectors, no old data to keep etc.

If you get error messages about kernel not being able to re-read partitions, errors about active mdraid arrays preventing creation of new ones etc. here's few commands to try. Replace /dev/sda with /dev/sdb and repeat until you've gone thru all disks installed. Especially mdadm can be very persistent and ghost arrays keep coming back from grave time after time. For example if you had mirrored /boot and you wiped partitions on disk without first doing "mdadm --zero-superblock" it will suddenly reappear when you create new partition starting from same sector.


I have seen some people crying about Hetzner serverbidding.com dedicated servers not having new disks. I don't see how anyone could expect them to put new disks on dirt cheap used servers. Still checking SMART attributes and wiping disks before going live isn't bad idea. Well it isn't bad idea even with new disks or your own used disks. This is entirely optional step but remember it's impossible to do this later if you change your mind as it's destructive. Of course one could break RAID of running system to do destructive tests, but without dual-redundancy you're risking it all.

Depending on what sort of environment you're in some of these commands might fail or require install of additional packages. Steps below were tested only with Hetzner rescue system. Remember that only part that really matters is "dd if=/dev/zero" lines to overwrite disks with zeros. This will work with even most minimal rescue boot - everything else is optional and can be skipped.

Now when preparations are done we can finally start actual install process. As I've said multiple times you really should have SSH connection now open so you can copy-paste commands to remove server.

Remember you shouldn't blindly copy commands used, but also understand why and how they work. Otherwise you're royally screwed when your server fails to boot one day and you're stuck with very restrictive rescue mode boot to recover it. Backups? What did you say? Can't hear ya - and I have RAID! :)

We start all partitions at block divisible by 4096kiB (4MiB) to hopefully ensure proper sector alignment regardless how crazy underlying hardware is.

Having 8GB /boot is way overkill, but there's very good reason for this. If you're ever in position that requires reinstall of server with encrypted mdraid and lvm it can be tricky. With 8GB /boot you can break underlying mirror and do clean Linux install entirely on one half of it and reboot computer to completely new Linux install. After your new system is running from previous /boot you have full system with all tools in hand to work with to make it again redundant, enable lvm, perhaps convert from lvm+ext4 to zfs or btrfs etc. Way beyond scope of this document but very much doable if you're careful - and preferrably first test it all locally on virtual machine before touching remote headless server.

Naming of partitions, volumes and filesystems has some logic. Replace "S16" in beginning with your server name or some other ID which you will not reuse. This is to prevent issues due conflicting labels if you ever need to move disks between two servers that were both installed following this same guide. DO NOT use dashes in labels, it will confuse LVM. Keeping this ID short, 4 chars or less, is preferred. Too long labels will cause problems later, especially with vfat that has maximum volume label length of 11 chars.

Feel free to come up with own better naming as long as you have one. Calling them foobar1, xyzzy35 and sexypinkspeedoman42 might be humorous (and exactly what you should expect to find in my blog), but just don't do it. Imagine someone two years from now trying to remotely recover non-bootable server in minimal rescue mode. That should be challenge big enough even without obfuscated device names.

Device names, partition and filesystem labels used in rest of this post are:
Some of these logical device names (/dev/disk/by-id, /dev/md) are not available in various live and rescue boot systems. Therefore we use device names directly while installing. UUIDs will be used for resulting install. This allows freely moving disks between ports, controllers and if even from internal SATA port to external USB3 ports - all without need to make any changes anywhere, it'll just works. Yes - it'll work even with EFI.

I hear you all. Pics or it didn't happen, right? Complete set of screenshots from installing server by following instructions above. Any deviations due this horrible WYSIAWYG editor blogger forces me to use. 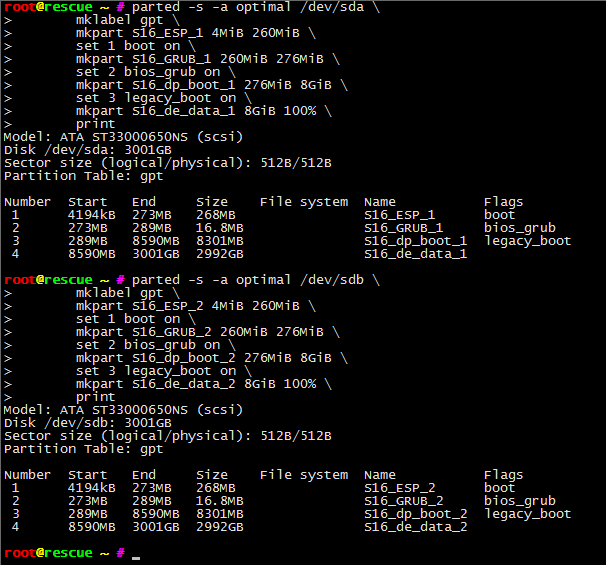 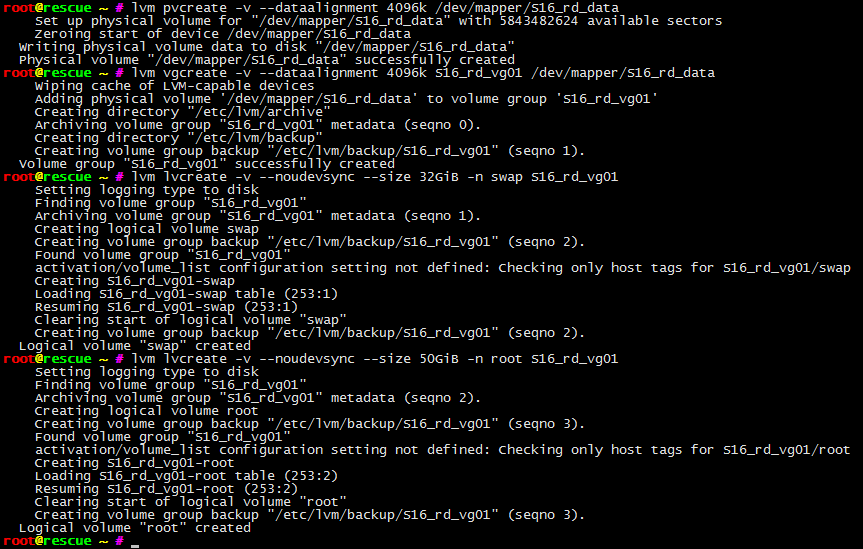 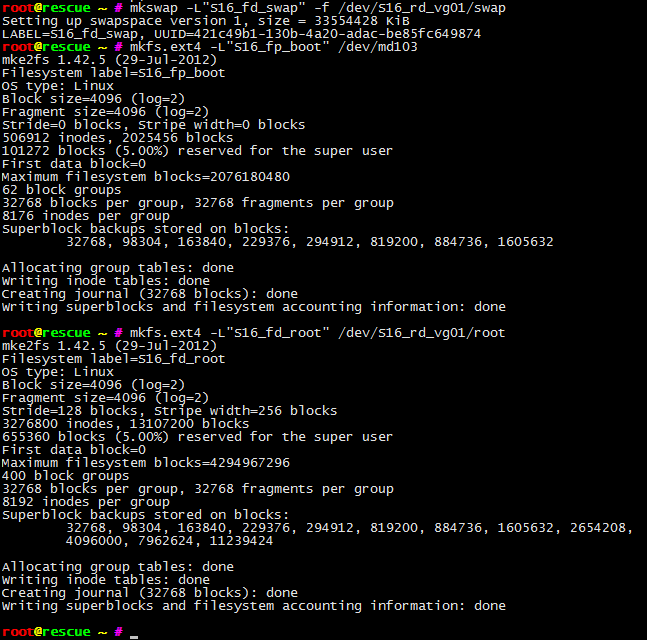 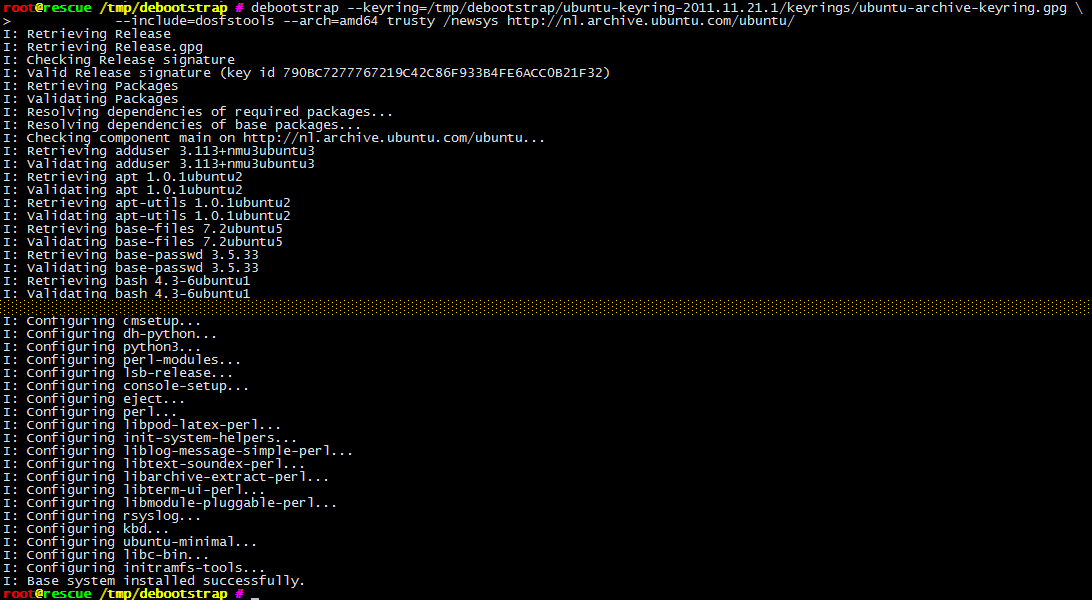 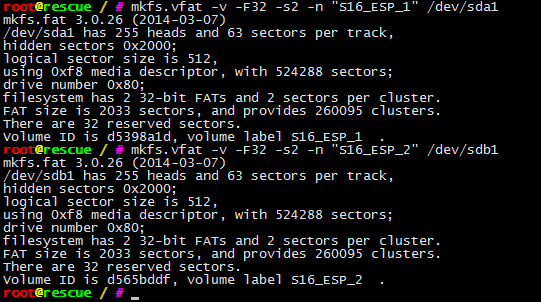 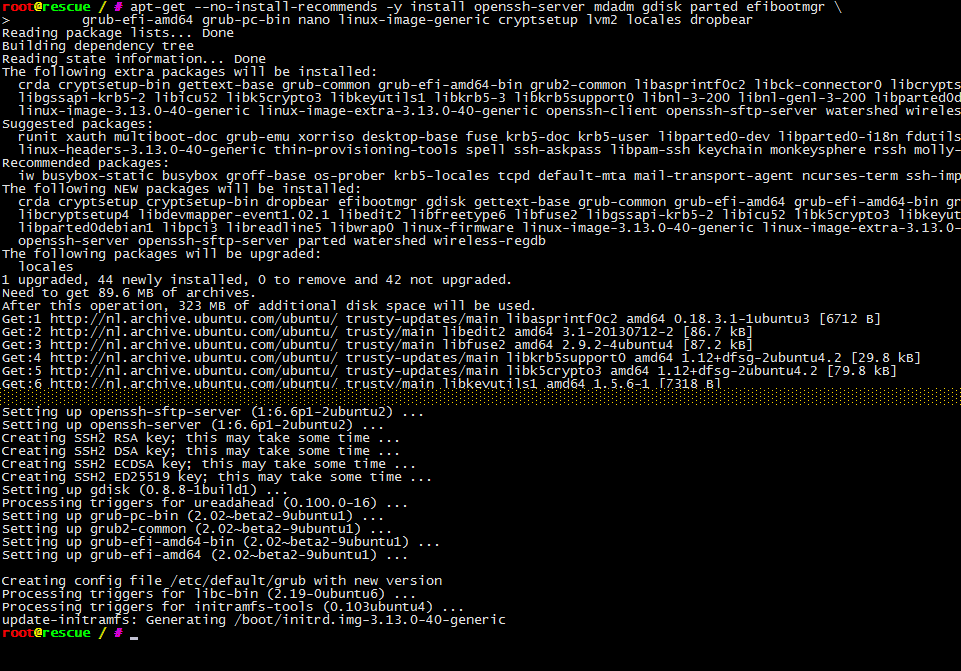 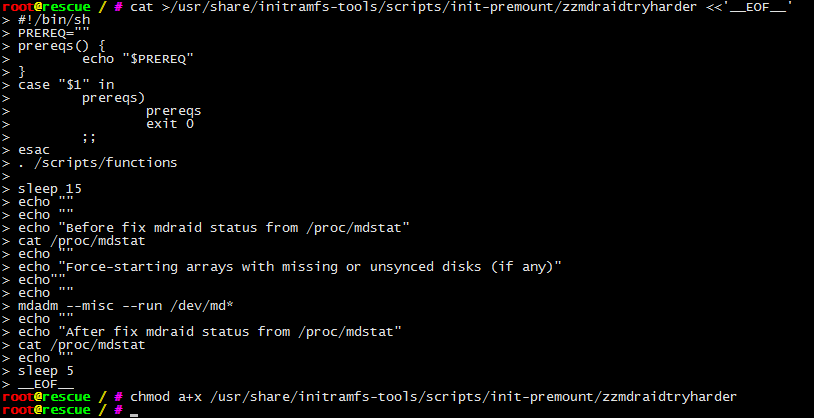 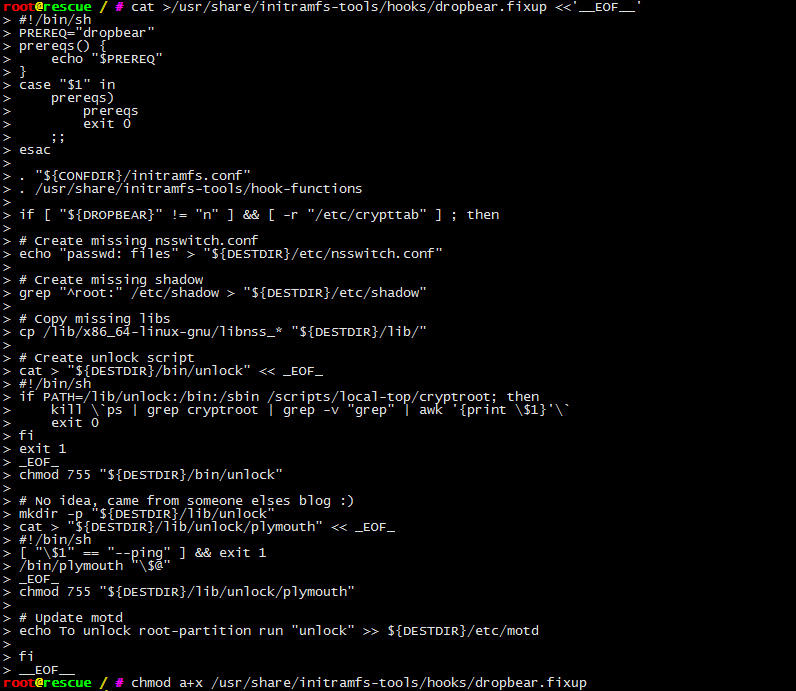